Scone or scone? That is the question 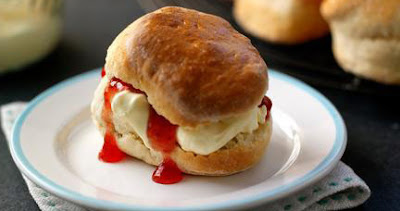 One thing led to another, and I found myself trapped on page 326 of "Pies and Prejudice", Stuart Maconie's epic exploration of the North of England. The trouble being - having read the entire book with Mr Maconie's voice in my head, I had come up against a single word, without a clue as to how he might pronounce it.

The word was "scone".

Do you - I asked him through the medium of Twitter - say "scone" to rhyme with "stone" or "gone"? He does not reply, but it is too late, I need to know, for it is a question that has haunted me for my entire life. I dare say it has defined me somewhat. Defined me as a bit of a twat.

Having been brought up in the 1970s, one of my finest memories is the Bunfight at the OK Tearooms epsidoe of The Goodies, where the trio fall out over this very question, with near fatal results.

So, I asked my followers on the Twitter and the Facebook. How do you say it, and where do you live?

The result is this map in wonderful Comic Sans-o-Vision, the Font of Champions 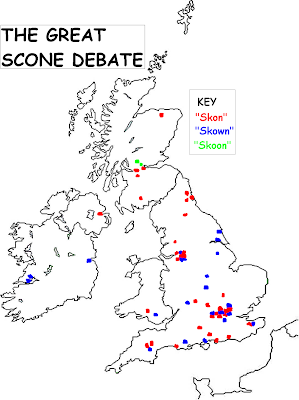 As you can see, there is a fair spread of skon / skown, with a couple of contrary jokers north of the border insisting on "skoon". However, it is clear that "skon" (which many may think is the working class option) heavily outnumbers the more plummy "skown", but I imagine that it's skon people who end up suffering as the skowner sit around having cream teas at the Savoy.

But - most tellingly - it's "skown" in Southampton and "skon" in Portsmouth, and a similar divide between Dublin and Belfast; while there's a battle between the two in the viarious suburbs of Manchester, spreading hate and despiar right across Lancashire. No wonder the world's completely fucked up.