In which your author becomes an accidental matchmaker 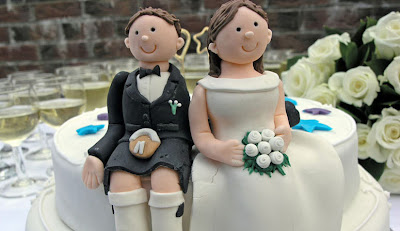 I've been writing various blogs for myself and various - excellent - organisations for the best part of ten years now. There have been ups (Two national 'best blogger' awards), downs ("A turd-in-process being squeezed out of the fundament of your own prolixity" being my favourite piece of unintentionally hilarious trolling), and some side-to-sides (being called 'better than Jeffrey Archer', for example) down the years that have made it all worth while.

But I have never woken up at five in the morning for an unspeakably early start at work, flipped open my iPad whilst sitting on the toilet, and squealed with delight.

For there, in my Twitter stream was a message from a regular reader of my (officially) sixth-best British journalism blog Angry People in Local Newspapers, which said this:

"FYI. A man found my blog through your blog and now we are married (and I live in Canada). I owe you a pint."

I know what you're thinking, and you are correct: YES! FREE BEER! My writing has brought me prizes of electronic gadgets and a gas boiler down the years, but none has made me so pleased as this particular piece of news. Admittedly, it hasn't kept my house warm, but you can't have everything.

Also, I am thinking that the reader known as Non-Working Monkey is now living in a state of happy marriage because of some stuff I poured out of my brain onto the internet. Of all the things I've done in my life - bringing two excellent children into the world, chasing a dog off a football pitch, asking the awesome Neil Gaiman to write the foreword to my first book, and the twin triumphs of meeting a current world leader five minutes after the biggest poo of my life aside - my unwitting act of match-making is up there as the most incredible thing that's ever happened to me.

I didn't go into blogging for the cash (send more money), the fame (Agents: Please ask about my two brilliant fiction manuscripts), nor the recognition, but the fact that there are actual real live breathing people out there brought together because of something I wrote will probably have me walking on air for the rest of the year.

Yes, my default position is one of complete misery, I'm on pills for me nerves and I drive my middle-age spread around in a fifteen-year-old Nissan Micra. But, today, in the words of cartoon dog Droopy: You know what? I'm happy.
Posted by Alistair Coleman at Wednesday, August 29, 2012

Email ThisBlogThis!Share to TwitterShare to FacebookShare to Pinterest
Labels: some nice news for a change, weddings