"You have reached your final destination," said the sat-nav, with a triumphant air of "fuck you" after we had spent much of the drive down ignoring its advice. And by "final destination", it is clearly more like the film series of the same name, rather than the end of our actual journey.

So, we drove a bit further, then a lot further, and then we drove back because it really was the right place. I know one should never get one's hopes up when the word (cough) "Travelhovel" is involved in any trip away from home, for they have reached the very bottom end of the scale for budget hotels, and kept digging. To borrow the words of poor, dead Alec Guinness in his least favourite role: "You will never find a more wretched hive of scum and villainy than the Whitstable Travelhovel". And I should know, because I've stayed at the one in Swindon (and in my defence, both were booked by other people).

Petrol station, Little Chef, run-down hotel in the middle of a sea of litter-strewn tarmac, built far too close to the thundering A2 trunk road.

Inside: flaking paint; a bed with legs falling off from the energetic nocturnal sports of earlier customers; holes in the duvet cover; a kettle with exactly two teabags, two coffee sachets and two tiny pots of not-milk; and a TV that was cutting-edge cathode ray technology back in the early nineties. Even the single chair in the room is so filthy I think twice about hanging my jacket over the back. And I tweet:

Dear Travelhovel, I have screwed the legs back on the bed in room 27 because you couldn't be arsed. Your pal, etc

Further adventures turn up cigarette burns in the black-out curtains for that authentic "starry sky" experience when closed; the toilet roll holder held to the wall by God-knows-what and the paper NOT folded into a point. It takes dedicated complacency to keep standards so low across so many hovels.

Dear Travelhovel. Me again. I haven't got the tools to sort out the broken toilet roll holder in room 27. You're on your own. Your pal, etc

On the plus side, we note that there is a plug for the bath, an extravagence that will cost Travelhovel dearly later in the evening. Oh, yes.

Then I notice that the internet is being charged at £5 per hour in a brazen attempt to gouge even more from hapless customers of what must surely rank as the Ryanair of hotel chains.

Dear Travelhovel, Yeah, guess who? Five quid an hour for internet? Bugger, and indeed off. Over and out, Your former pal, etc

Like a teenager with a hangover, we vow "never again", but know that - yes - we will.

Post script: This is the view you get of the place on Google Street View: 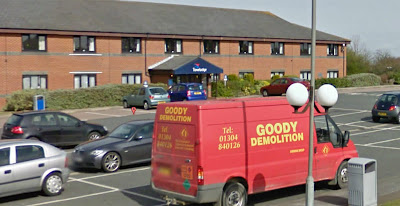 Email ThisBlogThis!Share to TwitterShare to FacebookShare to Pinterest
Labels: hive of scum and villainy, hotels