Taekwondo v Morris Dancers: Whoever wins, we all lose 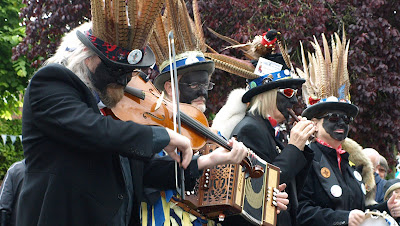 To the village fete in Jane's home village of Overton, a two-day street fair right outside the front door of her parentals.

The main arena (part of the street cordoned off by the few hay bales remaining after a freak storm on the first morning washed the rest into the River Test along with several pensioners and a dog) was a blur of white dressing gowns as grown men who ought to know better, and young boys who also ought to know better, fly at each other and kick flimsy bits of wood to oblivion.

And if this display of the martial arts taught me one thing, it is this: Don't try to rob people wearing dressing gowns whilst armed only with a flimsy piece of balsa wood. They'll kick the fuck out of it, and you'll be at their mercy and tied up with their dressing gown cord in no time.

I'll certainly think twice. In fact, I'll use my new contacts and set a heavily-armed troupe of Morris Dancers onto them. In fact - any village that can organise this kind of show on a bouncy castle will get my full attention, and a one pound donation to the charity of their choice.

MAKE IT SO.
Posted by Alistair Coleman at Thursday, August 02, 2012