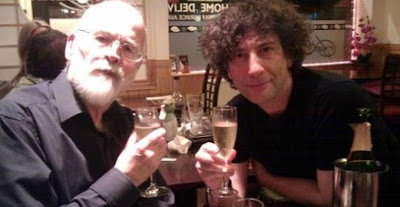 One of the greatest crimes of this modern age (barring quite a lot of murders and people having sex with cats) is the fact that the Terry Pratchett and Neil Gaiman novel "Good Omens" has never been made into a film or a TV series. As fantsy works go, it is head, shoulders and devilish horns above anything else, past, present, future, or residing in parallel dimensions.

There have been rumours of deals, followed by development hell and the inevitable crushing disappointment, but it is now abundantly clear that Stephen Fry is now far to old to take the role of Aziraphale and both leads will now have to be David Tennant before even he dies of old age. In fact, there's probably enough material to film a "The Not Making of Good Omens" which would fill an entertaining hour or so on a BBC2 theme night. Given the chance, I'd offer a quid for the right (50p each for Terry and Neil), and give it to the BBC to with a brief that simply reads "Stephen Moffat, and step on it."

Writing collaborations come and go, but Good Omens is one of those rare and happy occasions when the end result is far greater than the sum of its parts, and it's a shame that Pratchett and Gaiman never quite got it together to repeat the exercise.

To quote poor, dead Tomorrow's World: "That is, until now", and if this plan comes off, we'll all be millionaires.

It's quite simple: Trick Gaiman and Pratchett to enter a room together (Gaiman tempted in with a sign saying "Black Leather Jacket Sale NOW ON" and Terry with the promise that he is judging the fancy dress parade of sexy Werewolves at a Discworld event), lock them inside, and publish whatever they come up with after a month. I would pay a million billion pounds for the film rights, even if it is the harrowing account of two authors locked in a room for a month called "How I Killed and Ate Neil Gaiman" by Terry Pratchett.

Gaiman may be the younger, more athletic man, but Pterry's got a killer instinct an an eye for unusual and grizzly murder. All Neil has is a load of killer bees, completely useless in a confined space, sadly for him.

A win-win for all concerned, I think you will agree (unless you are Neil Gaiman).

This is a concept that could work for other writers. For example, I would be quite happy to lock Dan Brown in a room for a month with the 50 Shades of Grey woman, take any manuscript they produce and kill it with fire. Then leave them there for another month. Perhaps a couple of years.

Also, people who are not writers. Simply Red take note.

Ninja Edit: Of course, the moment I publish this, Rhianna Pratchett (daughter of Terry) writes - "Announcing the birth of Narrativia – a production company run by myself, Rod Brown & @terryandrob. First up are Good Omens & The Watch."