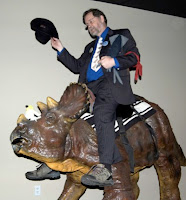 As a deity-curious atheist*, I was delighted to see that one of my favourite bloggers - the esteemed PZ Myers - lead an expedition to that warehouse of lunacy that is America's Creation Museum, run by a bunch of fruitcakes known as Answers in Genesis.

Air fares being what they are, I gave the whole day's adventure a miss - although there is a similar Bastion of WRONG in Portsmouth - so I was unable to ride on a dinosaur, just like poor, dead Jesus did before he got eaten TO DETH by a pack of marauding Roman velociraptors.

Sadly, there are worrying numbers of folk who genuinely believe the Earth to be only 6,000 years old, and that every one of us is descended from the survivors of a planetary flood that took place at the height of a decidedly learned Egyptian civilisation which somehow neglected to record their survival from an apocalyptic flood by sitting on the top of their pyramids, or something.

Luckily, one of these asshats is no longer President of the United States. But as long as these shameless arses try to get such cobblers taught in schools, we must be prepared to counter them. Counter them with SCIENCE and ridicule.

As a man of SCIENCE, I am prepared to give the Answers in Genesis people a good look at their evidence, before dismissing them as a bunch of complete lunatics who think fossils are a superb piece of Slartibartfast-type sculpture from Jehovah's design team. That is the way of SCIENCE: evidence first, laugh at crackpots second.

So, after looking at evidence offered by SCIENCE (and man alive, there was LOADS), I did what the Creationists said and sat down and looked for the Answers. Answers in Genesis. Then, I wrote them a nice letter. 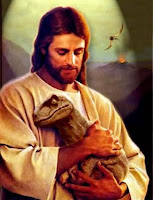 Congratulations on your doomed attempts at SCIENCE, viz: That whole creation of the universe in six days business.

In the name of balance and scientific enquiry (and eschewing the whole a-bloke-in-a-dress-said-it's-true school of thought that ended in the Spanish Inquisition), I was prepared to give you the benefit of the doubt, and subject your claims to the kind of rigour that real-life scientific theory has to survive in order to be deemed valid.

Therefore, against my better judgement, I followed your advice and sought out Answers in Genesis in the hope that some truth might be found. Excluding all other trains of thought, opening my mind, and letting nothing but Genesis flow in.

And to use a phrase which might be familiar to you: Christ on a bike, that was hard work.

I listened to Invisible Touch from beginning to end, and if you mean to tell me Phil Collins is the Second Coming, then you clearly are madder than I thought.

I await their reply, breath bated.

* You must have seen those adverts in the Sunday papers. "Gay? Bisexual? Curious?" It's much the same, only with the vengeful supernatural beings that live in your imagination
Posted by Alistair Coleman at Wednesday, September 02, 2009