And you thought I was done with politics for one week. After the crushing defeat of the forces of sanity at the hands of the cold, dark heart of Dorset County Council, you might want to call this a touch of catharsis. 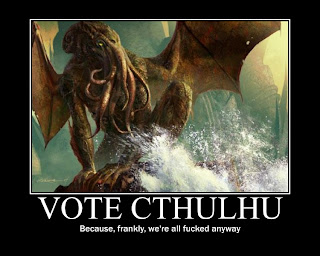 10. Conspiracy theorists in the United States are convinced that Barack Obama was born in Kenya, and therefore not entitled to stand for President. They are right, of course. Obama is a Zillon from the Planet Tharg, striving to bring humanity to its knees. Don't blame me, I voted for Kodos.

9. Italian PM Silvio Berlusconi, 72, denies that his attraction to young, flexible nymphettes has in any way devalued his premiership, pointing to a little known and recently added amendment to the Italian constitution allowing free beer, money and sex to all Prime Ministers once they reach the age of 72.

8. London mayor Boris Johnson has been embarrassed by the news that he was only second choice for the job behind "Queen of Mean" Anne Robinson. He will be further troubled by allegations that the Tories only turned to Robinson after a hat-stand with a blue rosette cited business interests for turning down the job.

7. Massive public disenchantment with politics has led to yet another shake-up of the electoral system. Instead of a General Election next June, Parliament will instead be chosen by a massive round of "Ip Dip Dog Shit".

6. Wonky-faced disgrace and comedy racist Nick Griffin only turned to extreme right-wing politics in order to fulfil his urgent psychological need to be near burly men with very short haircuts and leather boots. He's actually voted Lib Dem in the last couple of elections.

5. The green lines on the floor of the House of Commons are placed exactly two handbag swings apart to prevent MPs from assaulting each other. However, this did not stop Paymaster General Tessa Jowell entering the House with a six-foot bull-whip, for which Tory frontbencher William Hague was immensely grateful

4. In the recent Arkham By-Election, the All Hail Dark Lord Cthulhu Party romped home with a majority of over 300,000,000. However, their candidate was disqualified when rules regarding the raising of the dead were pointed out by election officials. The constituency will be represented by the Conservative Party's Dave Nyarlathotep, who follows many of the same policies

3. Known for his rapier-like wit, Prime Minister Winston Churchill once replied to Lady Astor's tart remark of "Winston, if I were your wife, I'd poison your coffee" with the now legendary "Fuck off, witches tits"

2. Thanks to a clerical error at the House of Commons Katie "Jordan" "Witches Tits" Price was officially Secretary of State for Wales for two weeks in 2007. In that period of time, the entire country disappeared up her clunge and hasn't been seen since. Price lays the blame entirely on former husband, Hoe Secretary* Peter Andre.

1. In 1979, when Margaret Thatcher came to power, there were between 3-4 million people unemployed. On leaving office, the official unemployment figure was 27. The same period marked a resurgence – through massive de-regulation – of the meat products export industry. A double win for The Iron Lady, I'm sure you'll agree

* A typo so excellent, I'm not going to fix it
Posted by Alistair Coleman at Thursday, September 03, 2009

Email ThisBlogThis!Share to TwitterShare to FacebookShare to Pinterest
Labels: a little bit of politics, FACTS