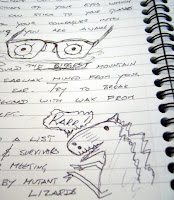 So. Ten ways to defeat boredom whilst trapped in long, boring meetings, presented to you in Technicolor So-that's-how-Scary-does-it-o-vision.

1. Create cut-out-and-keep pictures of your eyes which you can stick to your glasses too fool your colleagues into thinking you are awake

2. Build the biggest mountain you can from earwax mined from your right ear. Then, try to break that record with wax from the left

3. Compile a list of expected victims and survivors should your meeting be attacked by mutant lizards

4. Nod enthusiastically and agree with every crackpot proposal, then voting against them in the hope of cheering up other attendees 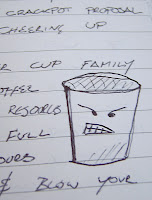 5. Make a family out of used coffee cups. If time and resources permit, give them full Viking funeral honours, ensuring that the occasion is fully minuted

6. Cough, sneeze and blow your nose frequently, before bringing up 'swine flu precautions' as part of 'Any other business'

7. Slip your favourite joke punchlines into statements on important, business critical subjects: "So, your action point is to ring the client straight after the meeting and tell him 'I'm not really a welder'" 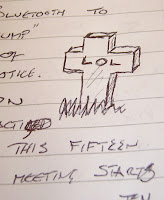 8. Wait until the last slide of your manager's 90-minute Powerpoint presentation before telling him his flies are undone. Even if they aren't

9. Set your Bluetooth to read "Lick my lovepump" and see if any of your colleagues notice

10. Fake your own death. The practised employee will do this fifteen minutes before the meeting starts, and take part in his own minutes' silence

Bonus: Write a list of ten – no, eleven – way to defeat boredom in long, boring meetings
Posted by Alistair Coleman at Monday, September 28, 2009