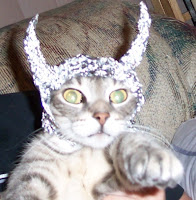 The boy Scaryduck Junior came home from school not long ago with his head filled with the idea – courtesy of a teacher who ought to have known better – that the moon landings were faked.

Honestly, some people just don't deserve to draw a salary, and I was so cross I nearly said something.

But, we ask, are conspiracy theories real?

And we can answer thussly: No. No, they are not.

Apart from these ones, obviously:

* A tinfoil helmet does not stop alien radio waves. It does, however, ensure your brain is cooked just the way aliens like

* Michael Jackson faked his death so he could enjoy loads of filthy granny sex with an 83-year-old Marilyn Monroe, who is also not dead

* Conspiracy theorists claim Nasa faked the moon landings. Wrong! The only part Nasa faked is the fact that Neil Armstrong has a face like Ann Widdecombe's slapped arse, so they substituted him for a finely-chiselled all-American fashion model

* Three-nippled chantoose Lily Allen (born ALIEN, sheeple!) hides the fact that she is a Zillon from the planet Tharg from her hordes of adoring fans. Her song "The Fear" is about her dread of being exposed as a corpse-animating off-worlder with a predilection for Snickers Duo bars.

* Is your internet buddy a member of the shape-shifting Freemason Fourth Reich New World Order Surveillance-Industrial ZaNuLieBore Illuminati Brotherhood? If they routinely use the phrase ROFL (Reptilian Overlords For Life) in their correspondence, the answer is YES

To summarise: Elvis IS dead, crop circles aren't real and people in alternate dimensions do not have a different-shaped gear stick on the Mini Metro. That is all.
Posted by Alistair Coleman at Wednesday, July 29, 2009

Email ThisBlogThis!Share to TwitterShare to FacebookShare to Pinterest
Labels: conspiracy theories, I for one welcome our new reptilian overlords, ZaNuLieBore