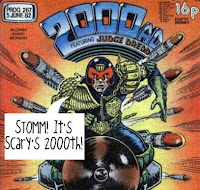 Sickipedia owner and all-round internet hero Rob Manuel recently found himself the victim of a scammer. A scammer with dead eyes and frightening ladybumps who took advantage of his good nature to the tune of ten pounds.

Happens to the best of us, except Rob blogged it for the benefit of an audience of billions and probably queered this lady's patch for the foreseeable.

If you have a desire to *ahem* queer her patch, I understand her theatre of operations is Kentish Town in that there London.

It's been a long time since I was done similarly (the same punkette did me for "20p for the phone" every day for a week when I was a gormless student), and I've since learned to fight back.

There's a bloke in Weymouth who does the "I haven't got enough train fare to get home to London" one all the time. He stands around the front of the station and nearby pubs, begging for money and generally does quite well, before disappearing into the bowels of Park District, presumably for the substances his lifestyle demands.

Funnily enough, I got collared by a guy outside London's Paddington Station doing the "I haven't got enough money for the train fare to Weymouth" swindle, and emboldened by a couple of pints and a fair few war stories in The Frontline Club I gave him both barrels:

"One – you're outside the wrong station, pal. If you want Weymouth you should be at Waterloo. The last train's at half nine – you'd better get a crack on."

"Two – Just go as far as Dorchester. If you've got the guts to ask strangers for money, I dare say you can hitch the rest of the way."

Charming. You try to offer some free advice and that's the advice you get.

And then I got thinking, for I am a GENIUS. I could pair them off. Get Bloke A to contact Bloke B, they swap crack houses, and there'd be no need for this dreadful begging outside railway stations.